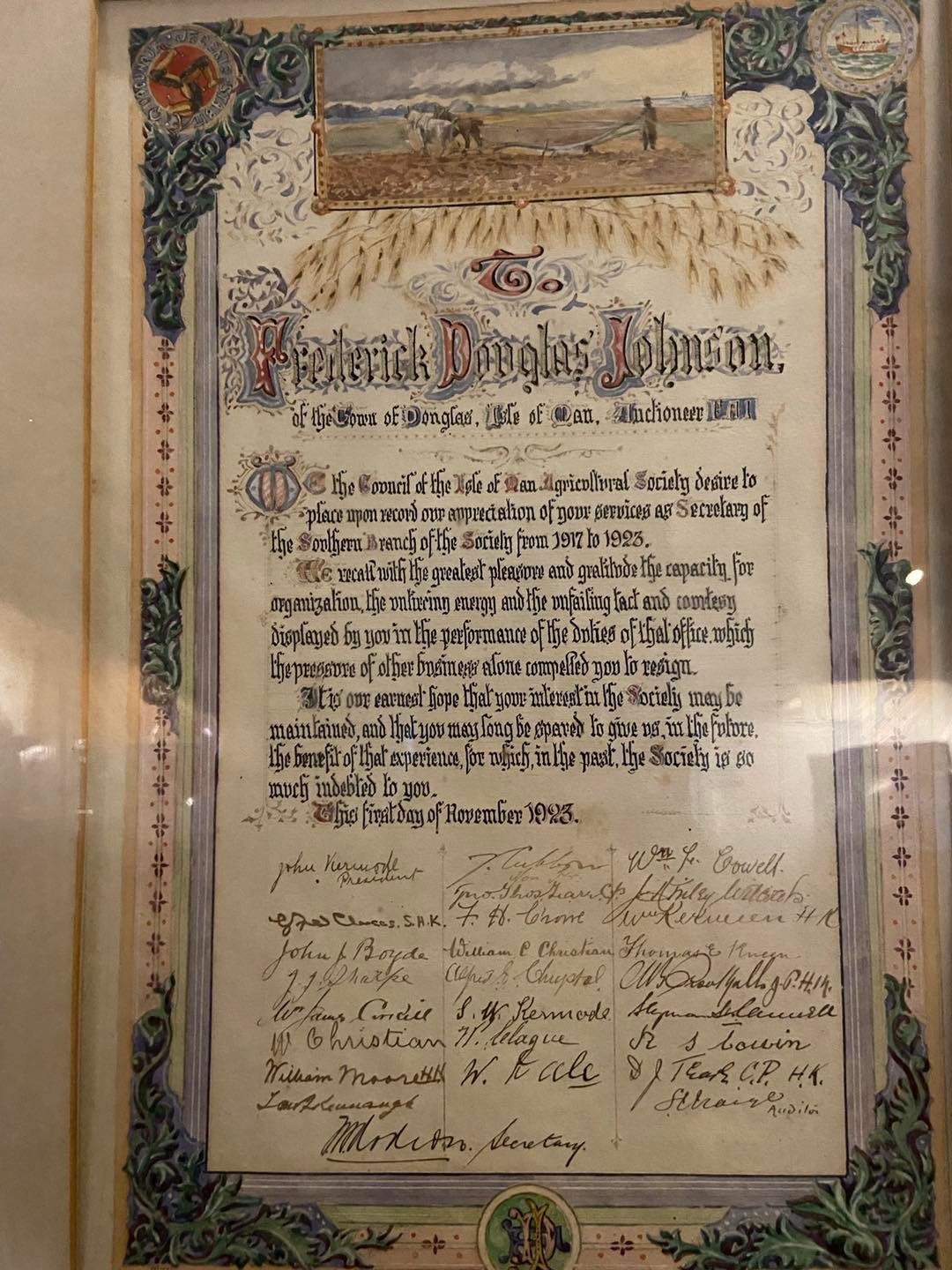 On behalf of the Southern District Agricultural Show and the Royal Manx Agricultural Show we were wondering if anybody new anything about this.
It’s an illuminated address from 1923. It’s now at the Manx museum and this is the information that they found out about it.
We just thought there might be some decedents that might like to see it!
If anyone knows anything more, please let me know and I can let the museum know.
Johnson, Frederick Douglas
Auctioneer and Valuer
Joiner, Auctioneer and Valuer, Coroner and Company Director (Palace and Sefton Hotel)
Abode: 43 Alexander Terrace and 1 Windsor Road, Douglas
Born 1872
Died 1938
His father was Manchester born Joseph Johnson- also an Auctioneer, and his mother was Elizabeth Nee Hayley. ‘Fred’ Johnson was baptised 19 May 1872.
He married Manchester born Annie Gradwell of Greeba and had two children- Harry Joseph and Vera Gradwell Johnson. Harry took over the business when Fred died in 1938 (see obituary Isle of Man Examiner 20 May 1938 page 3- see text copied below)
DEATH OF PALACE CO. DIRECTOR: PASSING OF MR. F. D. JOHNSON
The death took place at Noble’s Hospital, on Tuesday, of Mr. Frederick Douglas Johnson, auctioneer, and director of the Palace and Derby Castle Co. and the Sefton Hotel Co.
On April 1st last year, Mr. Johnson handed over to his son, Mr. Harry J. Johnson, the large business which, he had built up by his personal industry and ability and was hopeful of regaining new energy and health.
Constant ill-health was the sole cause of his retirement, for he was then only in his 65th year, and it was believed that freedom from the cares of business would give him a new lease of life. That hope was not fulfilled. Although he was often seen in the streets of Douglas, his health did not improve, and there was a complete breakdown a few days before his death.
Mr. Johnson was probably the best-known businessman in Douglas. In his youth, he was a popular figure in athletic circles, and as he grew older and the development of his business occupied all his time, he retained the friendships of his youth and won the esteem and confidence of his many business associates.
His father, the late Mr. Joseph Johnson, was a native of Manchester, who came to Douglas over 70 years ago. He, too, was an auctioneer, with premises in Duke-street, and he was a conspicuous figure in the town of his adoption, his literary activities helping to extend his reputation. ” Fred” Johnson never courted publicity in any way but rose to a position of eminence in the Island’s business community by steady application to his calling, a shrewd judgment in business affairs, and a quiet geniality which made him the best of companions. A joiner by trade, he served a term as Coroner of Rushen. and then established himself as an auctioneer. His skill as a valuer of genuine old furniture, pictures and pottery and art curios was unrivalled, and he was often called into consultation before any such valuable articles changed hands in the Isle of Man.
Island’s Leading Auctioneer.
It was not long before he attained the position of leading auctioneer in the Isle of Man, and he has handled the sale of every big property which has changed hands in the last decade or two. His sound business acumen earned him a seat on the directorate of the Palace and Derby Castle Co., and when the Sefton Hotel project was converted into a company, he became a director of that concern. He retained both these posts up to the time of his death. In his younger days he was a regular competitor in the athletic meetings at Falcon Cliff and rode the old ” penny farthing” bicycle in many a strenuous bicycle race.
He is believed to have been the first man in the Island to ride a bicycle fitted with pneumatic tyres.
Swimming was another of his sporting pursuits, and he was President of the Douglas Swimming Club for many years. Mr. Johnson married Miss Annie Gradwell, of Greeba, who survives him. There are two children, Mr. Harry J. Johnson, and Mrs. V. Heaton. of Manchester. The funeral took place yesterday, when the body was placed in a vault which Mr. Johnson ordered to be constructed some years ago. The large number of men prominent in the public and business life of the Island who followed the cortege to Braddan, formed a striking testimony to the high place held by the late Mr . Johnson in the esteem of his fellowmen. Deemsters Farrant and Cowley, the directors of the Palace and Derby Castle Co. and the Sefton Hotel Co.. and the staffs of the various amusement centres in Douglas, were included among those who walked behind the hearse as it moved away from the late Mr. Johnson’s residence in Windsor Terrace, and the number of wreaths carried by special car was considerable. The two principal mourners who attended were Mr. Harry J. Johnson (son) and Mr. T. Heaton (son-in-law). A short service, conducted by the Rev. C. V. Stockwood. M.A.. Vicar of St. George’s was held at the cemetery.

Previous Next
Close
Test Caption
Test Description goes like this